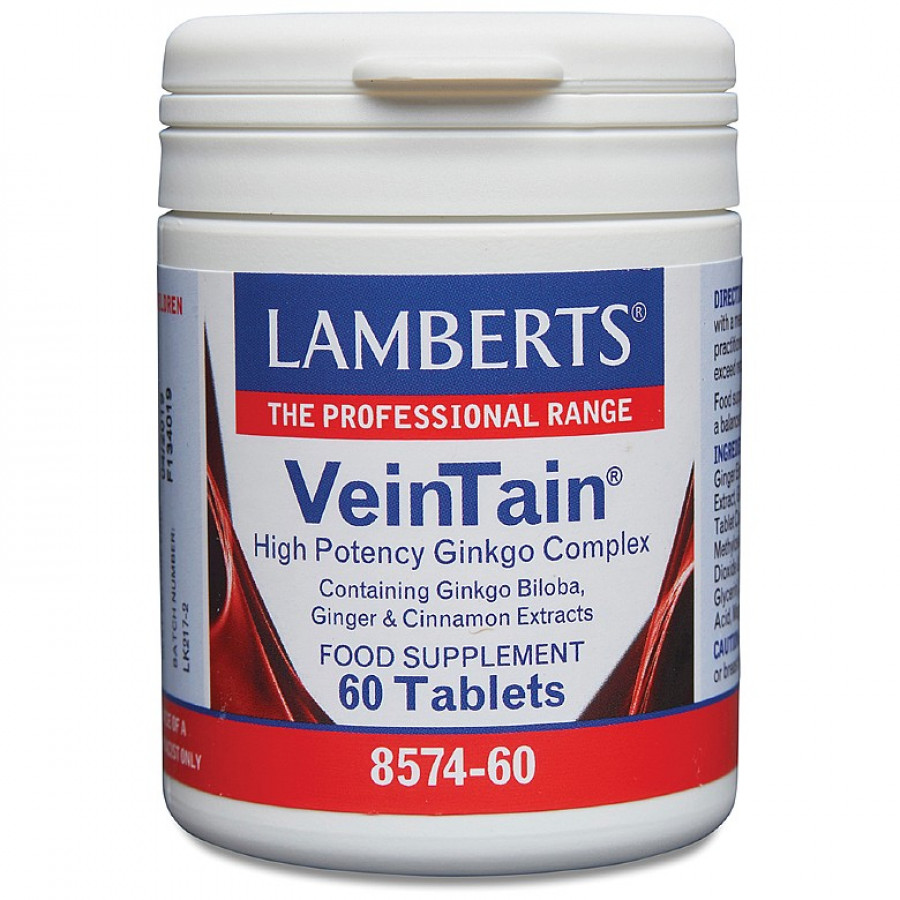 Lamberts VeinTain 60 Capsules are a high strength Ginkgo biloba formula, which also provides potent levels of Ginger and Cinnamon. Ginkgo has been shown to be useful for helping to maintain the circulation of blood to the extremities such as the hands and the feet. Lamberts VeinTain provides the full 6000mg of Ginkgo (as 120mg of a concentrated extract), the level used in many of the studies.

Lamberts VeinTain also provides potent extracts of two warming Spices, ginger and cinnamon, and it is this combination that has made it one of the most popular Ginkgo formulas available. As with almost all Lamberts products, VeinTain is made to GMP pharmaceutical standards in the UK.

Ginger and cinnamon are included in the VeinTein formula, as they are thought to increase thermogenesis and thereby stimulate bodily functions such as circulation. It will also enhance the flow of blood throughout the Body, making it useful for reducing pain, cramping and weakness caused by narrowed arteries in the leg, a disorder called intermittent claudication.

Ginkgo is a popular herbal medicine, derived from one of the oldest species of tree on earth and is widely marketed as a 'memory booster'. Ginkgo biloba does help combat age-related Memory loss, but whether it is a 'smart pill' meant for everyone remains to be seen. The medicinal form of the herb is extracted from the fan-shaped leaves of the ancient ginkgo biloba tree, a species that has survived in China for more than 200 million years. A concentrated form of the herb, known as ginkgo biloba extract (GBE), is used to make the supplement. GBE is obtained by drying and milling the leaves and then extracting the active ingredients in a mixture of acetone and water.

The fact that ginkgo aids blood flow to the Brain -  thereby increasing its oxygen supply - is particularly important to elderly people whose arteries may have narrowed with Cholesterol build-up or other conditions. Diminished blood flow has been linked to Alzheimer's disease and memory loss, as well as to Anxiety, headaches, Depression, confusion, tinnitus and dizziness. All may be helped by ginkgo.

Take two Lamberts VeinTain Capsules with a meal, or as directed by a practitioner or pharmacist.

To be stored in a cool dry place and protected from light.

Amazing anti inflammatory properties - highly recommended Use this product regularly along with other Lamberts products to help with my arthritis pain - very satisfied !

Joint health., I try to use fresh turmeric as much as I can but this gives me peace of mind- I take it regularly for joint health.