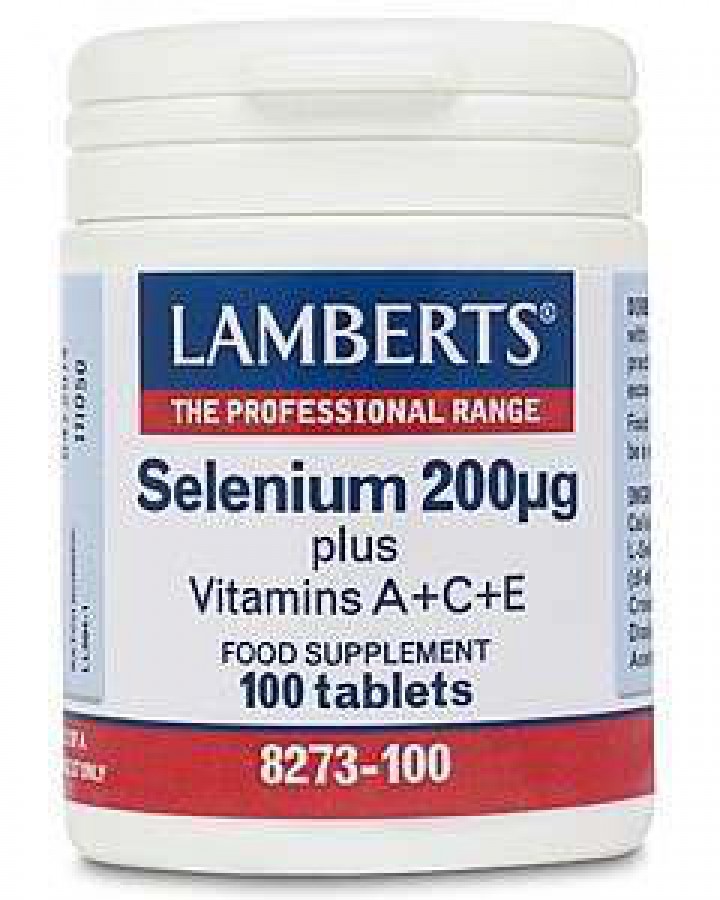 Lamberts Selenium 200µg plus A+C+E deliver twice the level of Selenium (200µg) to that found in most other Supplements. Combine that with significant levels of Vitamin A, Vitamin C and Vitamin E, and you have yourself one potent one-a-day formula!

What does Selenium do?

Selenium helps to maintain normal Skin, Hair & Nails as well as encourage the regular functions of the Immune System. Selenium acts as an antioxidant too - antioxidants are substances that help the body destroy or quench harmful free radicals that are produced quite naturally in the human body and which, if allowed to proceed unchecked, can harm tissues & organs.

Selenium is also thought to play a role in male fertility, contributing to normal spermatogenesis, and like selenium, Vitamins A, C & E are all known to play an important role in the Body.

Selenium has received a great deal of attention for its role in combating cancer. Cornell University and the University of Arizona conducted a 5 year study, which showed that the consumption of 200mcg of selenium daily resulted in:

In other studies, selenium showed promise in preventing cancers of the ovaries, cervix, rectum, bladder, oesophagus, pancreas and live, as well as leukaemia. Studies of cancer patients reveal that people with the lowest blood levels of selenium developed more tumours and had a higher rate of disease recurrence, a greater risk of cancer spreading and a shorter overall survival rate than those with high selenium levels. In addition, selenium can protect the heart, primarily by reducing the 'stickiness' of the blood and decreasing the risk of clotting, which in turn lowers the risk of heart attack and stroke.

Why is Selenium important?

Dietary intakes of selenium in the UK during the 70’s were nearly twice the level we consume today. Official data shows that the selenium intake for many adults in the UK is now below the RNI (Reference Nutrient Intakes) and this situation is due in part to the reduction in imports of selenium-rich wheat from North America.

Selenium increases the ratio of of HDL ('good') Cholesterol to LDL ('bad') cholesterol, which is critical for Heart Health. Smokers and anyone who has already had a heart attack or stroke may gain the greatest Heart & Cardiovascular benefits from selenium supplements, though anyone could profit from taking selenium in a daily vitamin & mineral supplement.

Take 1 Lamberts Selenium plus Vitamins A+C+E Tablet daily with a meal, or as directed by a practitioner or pharmacist.

Lamberts Selenium plus Vitamins A+C+E should be stored in a cool dry place and protected from light.

Happy., Very happy with these.