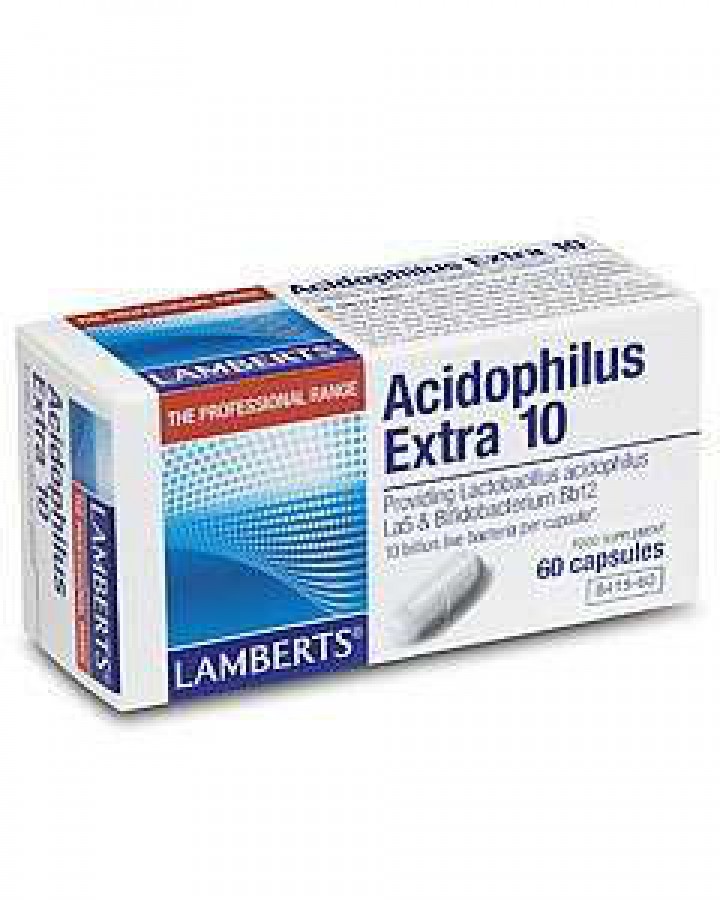 Lamberts Acidophilus Extra 10 60 Capsules are one of the UK's strongest Probiotics. Each capsule contains 10 billion friendly bacteria (Lactobacillus acidophilus & Bifidobacterium strains of bacteria) with the advantage that only one capsule per day needs to be taken. To ensure maximum potency, a desiccant lining is included in every Acidophilus Extra pot to prevent moisture spoiling viability.

The bacteria in Acidophilus Extra 10 are freeze dried with an acid stable polysaccharide matrix which surrounds the bacteria, helping to protect them from the highly acidic conditions they encounter in the stomach.

Lamberts was one of the first companies to produce live bacteria capsules in the UK (over 30 years ago) and have developed expertise in this area.

Lamberts Acidophilus Extra 10 is particularly recommended to those individuals whose gut flora is unbalanced due to conditions such as illness, Stress, IBS, yeast infection, bowel disorders (associated with increasing age). Those planning to travel abroad or taking oral antibiotics may also benefit from this live bacteria product.

What does bacteria do in the digestive system?

Our digestive system is colonised by billions of bacteria and most of them are harmless. However, during times of stress, travel, illness, changes in the diet, and taking antibiotics, the unfriendly, pathogenic bacteria sometimes overwhelm the friendly bacteria. Pathogenic bacteria is the bacteria that causes bacterial infection. One of the bacterial diseases with highest disease burden is tuberculosis, which kills about 2 million people a year, mostly in certain areas of Africa. Pathogenic bacteria contribute to other globally important diseases, such as pneumonia, foodborne illnesses, tetanus, typhoid fever, syphilis, leprosy and diphtheria.

Beneficial bacteria is better identified as a probiotic and these are live bacteria that may confer a health benefit to the host. Bifidobacteria and lactic acid bacteria are the most common types of microbes used as probiotics and are commonly consumed as part of fermented foods with specially added active live cultures. These foods include yogurt, soy yogurt or dietary Supplements.

Take 1 Acidophilus Extra 10 Capsule daily, or as directed by a practitioner or pharmacist. Take with a glass of water or milk, or with a meal.

Lamberts Acidophilus Extra 10 Capsules should be stored in a cool, dry place and protected from light, preferably in a refrigerator.

The dextrose and sucrose contents combined weigh less than 1/50 of a teaspoon (less than 1/2 a calorie).

Best probiotic., I always take a course of these after antibiotic treatment or a holiday- they're the best.