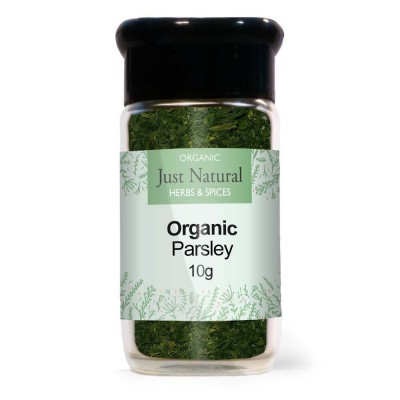 Parsley is a species of flowering plant native to central regions of the Mediterranean region, which has since been naturalised throughout much of Europe. This widely cultivated herb is used in varying European, Middle Eastern, and North American cuisines.

What does parsley pair well with?

Whether it is here in the UK, or across the pond, in the US, parsley is usually added to meat-based dishes, salads or pasta.

Is parsley and coriander the same?

No. While parsley and Coriander appear almost identical to the human eye, their taste and smell differ greatly. Coriander has a strong, citrusy aroma, while parsley is 'fresher', with a more mild scent.

What are the health benefits of parsley?

History tells us that parsley has been for hundreds of years traditionally, in the treatment of conditions like allergies or inflammatory diseases. It's no wonder it is considered one of the most powerful disease-fighting plants by some individuals. Parsley is full of Antioxidants, which scavenge harmful free-radicals, and the Vitamins A, C and K.