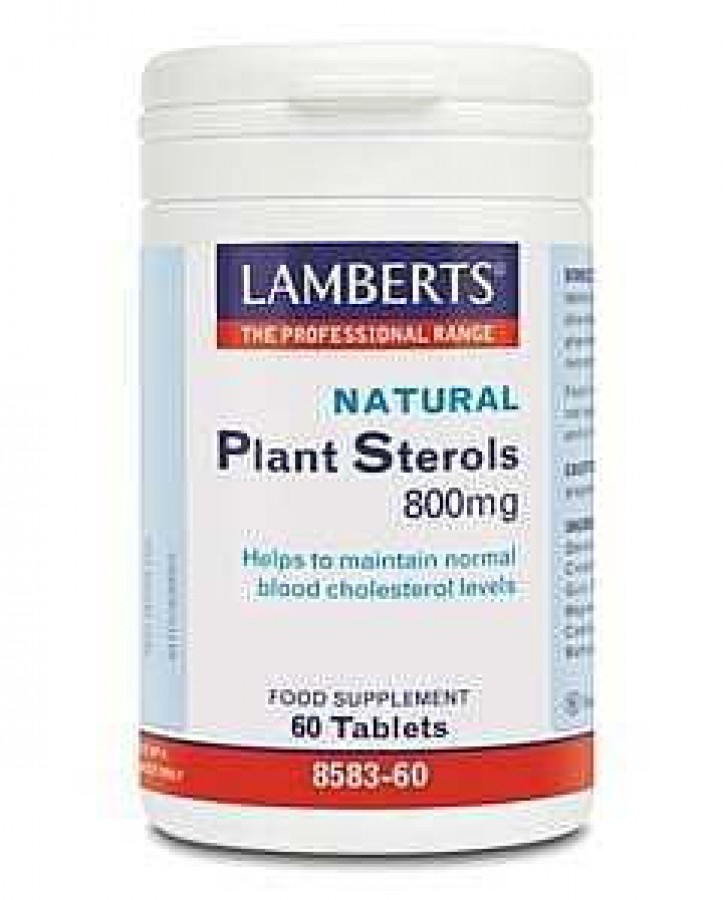 Lamberts Plant Sterols 800mg Tablets provide a full 800mg of 'free' (or pure) plant sterols with up to 80% beta-sitosterols. Plant Sterols are naturally present in vegetable Oils and grains, and have been shown to be vitally important for maintaining healthy Cholesterol levels.

Lamberts Natural Plant Sterols have been specifically formulated to contribute to the maintenance of normal blood cholesterol levels. This tablet. We quote the level of pure plant sterols in our tablets, not the compound weight declared by some companies, which may be only 50% sterols.

What are Plant Sterols?

Plant Sterols are steroid compounds similar to cholesterol which occur in plants and vary only in carbon side chains. More than 200 sterols and related compounds have been identified.

The ability of plant sterols to reduce cholesterol levels in the body was first demonstrated in humans in 1953. They were then manufactured and marketed as a pharmaceutical aid, identified as Cytellin (a treatment for elevated cholesterol) from 1954-1982.

Modern diets tend to be low in plant sterols, and so increasingly foods such as margarine are being fortified with sterols. These fortified foods can make a contribution to the daily intake of sterols but achieving an optimum intake by this means may not suit everyone.

The richest naturally occurring sources of plant sterols are found in vegetable oils and Nuts.

How do Plant Sterols work to lower cholesterol?

Take two Lamberts Plant Sterols Tablets daily with a meal, or as directed by a practitioner or pharmacist.

Lamberts Plant Sterols Tablets should be stored in a cool dry place and protected from light.