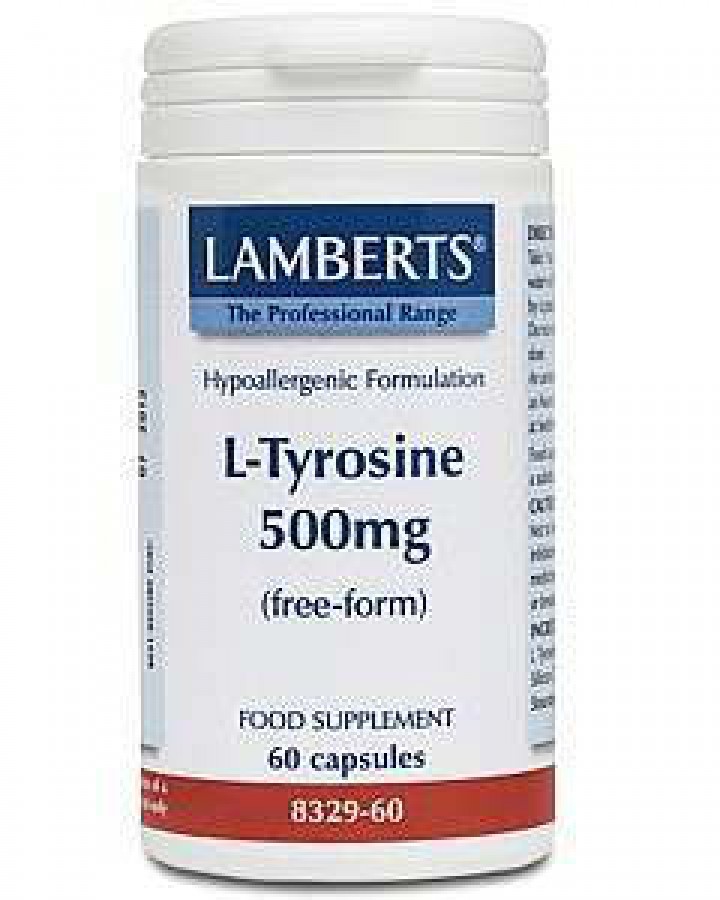 Lamberts L-Tyrosine 500mg 60 Capsules is presented as a free-form amino acid for maximum absorption. Each capsule provides a full 500mg of L-Tyrosine.

Tyrosine is an essential amino acid (Amino acids are classified as either essential or non-essential) as it is able to cross the blood-brain barrier. Once in the Brain, it is a precursor for the neurotransmitters dopamine, norepinephrine and epinephrine better known as adrenaline. These are all an important part of the body's sympathetic nervous system.

Tyrosine is found in many high-protein Food products such as chicken, turkey, Fish, Peanuts, Almonds, avocados, milk, yogurt, lima beans, Pumpkin Seeds, Sesame Seeds, bananas, soy products and cheese.  The word "tyrosine" comes from the Greek meaning for cheese, as that is where it was first discovered by German chemist Justus von Liebig in 1846.

A studies of tyrosine have shown it to be useful during conditions of Stress, cold, Fatigue and Sleep deprivation, with reductions in stress hormone levels, reductions in stress and improvements in cognitive and physical performance. However, because tyrosine hydroxylase is the rate-limiting enzyme, effects are do not seem to have any major significance on Mood, or cognitive and physical performance during a normal routine.

The daily recommended dose daily dosage is about 100mg for an adult, which amounts to about 6.8 grams (an equivalent to 1–3 capsules of pure tyrosine). It is not recommended to exceed 12000 mg (12g) per day, as excessive doses may decrease the absorption of other Amino Acids.

There are three known parts of tyrosine. In addition to L-tyrosine, there are two additional variations, which include meta-tyrosine  and ortho-tyrosine (these both occur in nature). These tyrosine variations are rare and arise through non-enzymatic free-radical hydroxylation of phenylalanine under conditions of oxidative stress.

Please note: L-Tyrosine should not be used with MAO inhibitors (a type of anti-depressant medicine).

Take 1 to 4 Lamberts L-Tyrosine Capsules daily with water or fruit juice, or as directed by a practitioner or pharmacist. An amino acid is best taken half an hour before any meal or at bedtime.

Lamberts L-Tyrosine should be stored in a cool dry place.

A white powder in a clear hard shell.