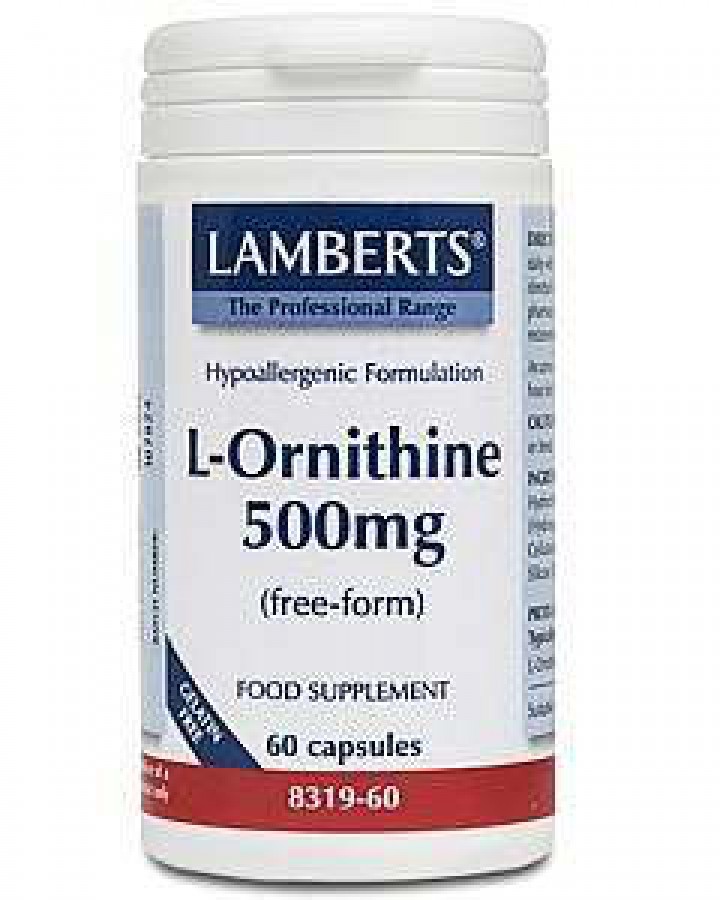 Lamberts L-Ornithine 500mg 60 Capsules provide a full 500mg of L-Ornithine in each and every capsule. They are presented in a free-form format for maximum absorption and are manufactured in the UK to pharmaceutical GMP standards.

What does L Ornithine do?

Ornithine is a precursor of arginine and citrulline and, when given orally, has very similar biological effects. It plays a role in the urea cycle - the main use of the urea cycle is in arginine biosynthesis, so, as an intermediate in metabolic processes, ornithine is quite important for liver and immune function. Ornithine is also used for improving athletic performance, reducing Glutamine poisoning in the treatment of a Brain condition due to liver disease (hepatic encephalopathy), and for the healing of wounds.

Ornithine releases growth hormone and helps maintain the health of the Immune System and the liver as it is a key component in the urea cycle. It is a central part of the urea cycle, as one of the products of the action of the enzyme arginase on L-arginine, which creates urea. Ornithine is recycled and, in a manner, is a catalyst. First, ammonia is converted into carbamoyl phosphate and ornithine is then converted into a urea derivative at the nitrogen terminal by carbamoyl phosphate. Another nitrogen is added from aspartate, which produces denitrogenated fumarate, and the resulting arginine is hydrolysed back to ornithine, producing urea. The nitrogens of urea come from the ammonia and aspartate, and the nitrogen in ornithine remains intact. Ornithine is abnormally accumulated in the body in ornithine transcarbamylase deficiency (OTCD). OTCD is a genetic disorder resulting in a mutated and ineffective form of the enzyme ornithine transcarbamylase. It is a common urea cycle disorder, but a rare metabolic disorder, occurring in one out of every 80,000 births.

Amino Acids are also used by the Body to build proteins. Proteins are essential for the formation of cells and are also involved in the biochemical structure of hormones, enzymes, neurotransmitters and antibodies. L-ornithine is frequently used by bodybuilders and weightlifters under the belief that it will increase levels of human growth hormone (HGH). However, clinical study has shown has since disproved this theory.

Take 1 to 3 Lamberts L-Ornithine 500mg Capsules daily with water or fruit juice, or as directed by a practitioner or pharmacist. An amino acid is best taken half an hour before a meal or at bedtime.

Lamberts L-Ornithine Capsules should be stored in a cool dry place and protected from light.

A cream powder in a hard shell capsule.