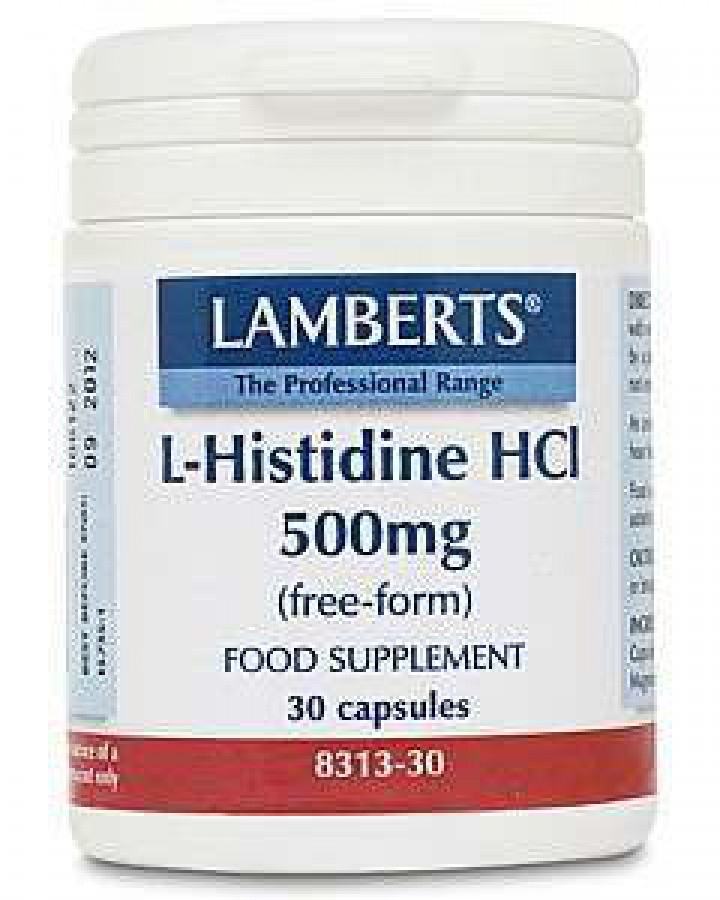 Lamberts L-Histidine HCI 500mg 30 Capsules are made in the UK in a factory working to pharmaceutical GMP standards and each capsule provides a full 500mg of L-Histidine HCl.  Histidine is considered a non-essential amino acid for adults, however it is involved with the regulation and utilisation of several essential trace Minerals in the Body including Zinc, Copper, Manganese and Iron.

What does Histidine do?

Histidine is an a-amino acid and one of the 22 proteinogenic amino acids. It was first isolated by German physician Albrecht Kossel in 1896.

Dietary sources of histidine include meat, Fish and dairy products, which probably account for most of the total found within our bodies.

Histidine is an essential amino acid in humans and it was initially thought that it was only essential for infants, however long-term studies have established that it is also essential for adults too. Amino Acids are used by the body to build proteins which are essential for the formation of cells and are also involved in the biochemical structure of hormones, enzymes, antibodies and neurotransmitters. The neurotransmitter, histamine, which is released during allergic reactions such as Hay Fever, is derived from the amino acid histidine. This is necessary for the maintenance of the Myelin Sheath, which is the protective shield for nerves.

Take 1 to 6 Lamberts L-Histidine HCI 500mg Capsules daily with water or fruit juice, or as directed by a practitioner or pharmacist. An amino acid is best taken half an hour before a meal or at bedtime.

Lamberts L-Histidine HCI 500mg Capsules should be stored in a cool dry place and protected from light.

A white powder in a clear hard shell capsule.