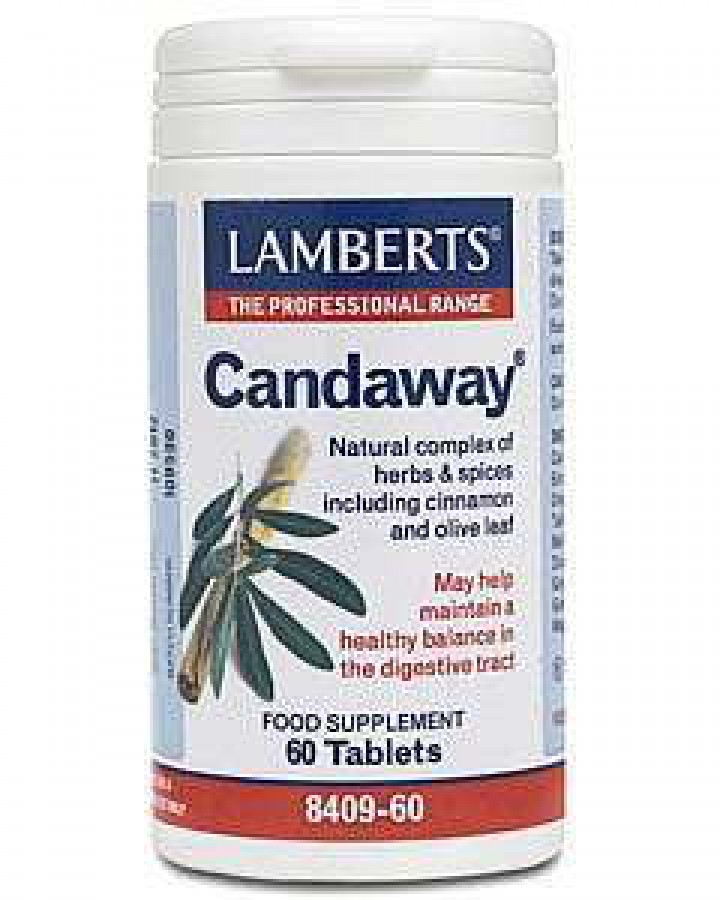 Lamberts Candaway 60 Tablets are a high strength formula that contain powerful extracts from Cinnamon bark, Olive leaf, Oregano and Fennel Seed. Lamberts Candaway is recommended for those people following a dietary regime designed to tackle an overgrowth of Candida albicans, which is a type of yeast that is naturally present in our digestive system.

Lamberts always ensure that the correct species and relevant part of the plant is used within there products. This is why cinnamon bark is specifically used, as it is the bark (and not the oil), which is known to have an effect on the growth of Candida albicans.

With consideration to the symptoms of thrush, this tends to be a clear indication of a general nutritional deficiency. It is therefore advisable to take a multivitamin and multimineral formulation from the time when you first notice the symptoms until the infection disappears. Strengthening your Immune System with Minerals such as Vitamin C and Echinacea will also help your Body to fight an acute yeast infection.

Candidiasis is a fungal infection that is caused by the overgrowth of a type of yeast called Candida, usually Candida albicans. This yeast is normally found in small amounts in the human body can affect areas such as the genitals, Skin, mouth, throat and blood. Certain medicines and health problems can cause more yeast to grow in the body, particularly in warm, moist areas.

What about Male candidiasis?

Yes, contrary to popular belief males are susceptible to candidiasis infections. A male yeast infection can particularly occur in those who have not been uncircumcised. The only symptom may be an inflammation at the head of the penis, but often there are no symptoms. A man with a yeast infection may infect his partner, and needs treatment.

Take two Lamberts Candaway Tablets daily with a meal, or as directed by a practitioner or pharmacist.

Lamberts Candaway Tablets should be stored in a cool dry place and protected from light.

Very good. , I've tried everything and this really helps. Thanks.