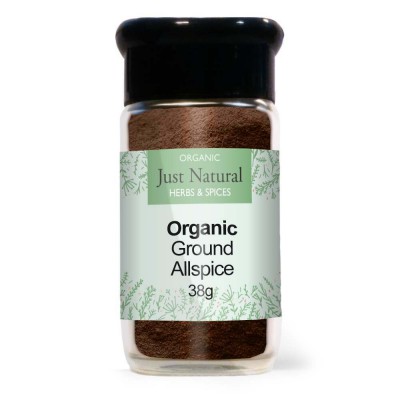 Where can you buy allspice?

Wondering where to buy allspice online? Then look no further than Natures Healthbox!

Is allspice a herb or spice?

Since the early 1600's, we in England have considered Allspice to be a spice.

What does allspice have?

Allspice (also known as Pimenta, Pimento or Jamaica pepper) is made from the dried berries of the Pimenta dioica plant but has the unmistakable flavours of Pepper, Nutmeg, and Cinnamon.

Does allspice have cloves in it?

No! But Allspice does have a slight clove-like flavour as the Pimenta dioica plant from which it is sourced, is a close relative to the clove plant.

Can I substitute allspice for cloves?

Yes, you can substitute allspice for cloves if it's presented in ground form. With this in mind, we recommend using Just Natural Organic Ground Allspice 38g.

What is allspice good for?

Allspice is ideal for your home-made sweet dishes, especially if you want to pack a punch in your beautifully baked gingerbread biscuits or apple pie. In traditional herbal remedies however, allspice has a somewhat fragmented history of use for the treatment of Indigestion, diarrhoea, and high Blood Pressure.