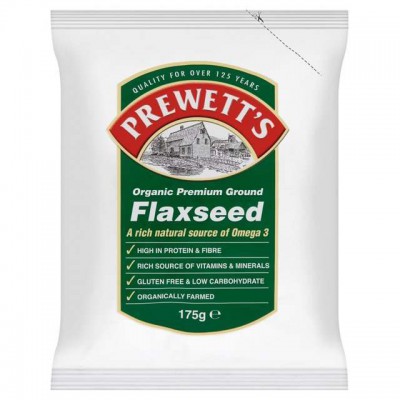 Prewett’s has been around since the days of William Prewett’s nearby flour mill in Sussex in 1872. Under William's ownership the Prewett’s Mill became an important hub of economic activity in Horsham, employing many skilled workers. Since then Prewett’s have been known for quality Food and products across the years.

Prewett's continued to prosper until it was finally closed in 1978 and relocated by it's new owners, Northumbrian Fine Foods, to Gateshead. The land of the old mill has since been redeveloped into modern 2-3 bedroom apartments but yet retains much of the buildings original and historical architecture, both inside & out.

Prewett's Organic Ground Flaxseed 175g is one of nature's Superfoods! Gluten Free, simple, and a rich natural source of omega 3.

What is Prewett's instant chicory root?

Prewett’s Organic Instant Chicory 100g is a caffeine-free alternative to your regular cup of Coffee. Made from 100% pure chicory root it is wheat and gluten free too!