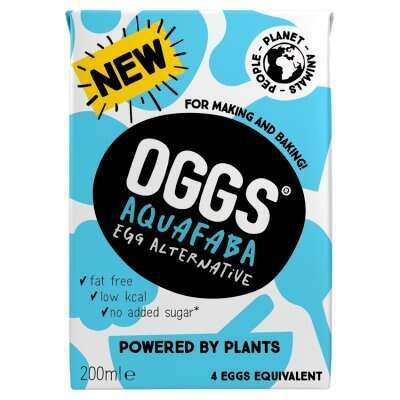 Every choice we make, from the clothes we buy to the Food we eat, has an impact on the world. OGGS plant-based alternatives to everyday foods taste as delicious as you’ve always known them, whilst doing their very best to positively change the future of our planet, animals and the people (you) who buy them. By choosing Oggs Aquafaba over eggs, every tonne of egg protein is replaced by chickpeas instead and greenhouse gas emissions are reduced by around 33.7 tonnes. That’s equivalent to 81,995 miles of driving a car or driving from Land’s End to John O Groats 94 times!

What is Oggs Aquafaba?

It is estimated that more than 60 percent of the world’s eggs are produced in industrial systems, mostly using barren battery cages. The Oggs Aquafaba Egg Alternative 200ml works to remove the 'hidden' animal products in the food chain by offering delicious plant based alternatives to eggs. This brown, cloudy liquid works just as well as an egg, whilst giving chickens a break.

How does Oggs Aquafaba compare to an egg?

An egg has approximate 11grams of fat (per 100gs) whereas our Oggs Aquafaba is fat free! Eggs have double the calories as Oggs Aquafaba too, containing about 373mg of Cholesterol - Oggs Aquafaba has none!

How do I use Oggs Aquafaba?

As a rule of thumb, for every egg you would normally use, try to use 50ml of OGGS Aquafaba. When used as an ingredient in home Baking or cooking, OGGS Aquafaba complements hundreds of sweet and savoury recipes – from sponge cakes and meringues, to mayo, mousses & so much more!

Many Oggs Aquafaba recipes require you to whisk it to the correct consistency, which ranges from soft to stiff peaks. For most recipes OGGS recommend an electric whisk, but if you’re willing to put in some serious arm work then you can use a hand one.

Why should I buy Oggs Aquafaba?

OGGS Aquafaba is a great way of switching to a plant-based diet, or cutting down on animal sources for health, environment or animal welfare reasons. Aquafaba can be frozen too, which is great if you don’t think you’ll use up the entire carton within a week of opening.