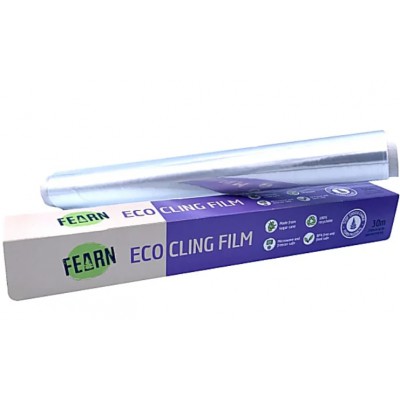 Fearn create sustainable, green alternatives to traditional plastic products without having to compromise on product quality and functionality. In fact its hard to argue their claim of being "the home of eco-friendly Household products", when Fearn debuted with the world's first eco-friendly cling film, which is made from sustainably farmed Sugar cane.

Until now, we have had to rely on terrible disposable PVC plastics to wrap our favourite foods in, or use an over-priced wax alternative. However, with the Fearn Eco Friendy Cling Film - 30 metres, you choose to change to a workable and fully sustainable product.

Yes, Fearn Cling Film is! And not only is it BPA free, it is food safe too!

Can cling film be recycled?

How do Fearn make cling film out of sugar cane?

Fearn Cling Film is made from the leftover wastage that builds up after sugar production. This waste is chopped and pressed to a pulp to create a sugar cane alcoholic resin substance that is then turned into the final product in which you see below.

Where do Fearn source their sugar cane from?

How can I use Fearn Cling Film?

Use Fearn Cling Film as you would your regular cling film product. It is also suitable for use in your microwaves and fridge-freezers.

What makes Fearn different to the regular cling film products?

There's nothing wrong with regular cling film as a concept, it’s simply what it’s made from. Most cling film products contain PVC, made from finite fossil fuels, which not only damage our planet but also our Food. Fearn Cling Film is different, and has been made without using petroleum - the underlying environmental problem with the traditional form.