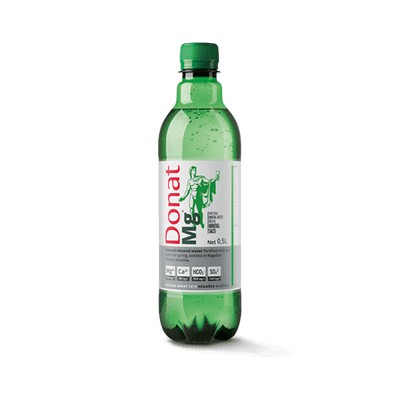 Donat Mg is a natural mineral water with more than 400 years of tradition. It has many beneficial effects on your well-being due to its higher content of Magnesium and bicarbonates. The effects of Donat Mg on Digestion were scientifically proven in a clinical study in Germany, back in 2015. Numerous participants were a part of this 6 week study that was conducted in accordance with professional standards applied to clinical trials on medicinal products. However, while consuming Donat Mg, don’t forget about the importance of a varied and balanced diet and a healthy lifestyle.

We already know about its clinically proven digestive capabilities but did you also know that many medical experts believe that magnesium helps to protect against colon, gastric, oesophageal and ovarian cancers. What we do know about magnesium however, is that it certainly does help reduce tiredness and Fatigue, supports the balance of electrolytes, muscle function and nervous system, and promotes healthy teeth and bones.

*Magnesium requirements can be met with only 3 decilitres of Donat Mg a day.

How did Donat Mg start?

The origins of Donat Mg mineral water are connected with the gods of ancient mythology, who recognised its restorative properties. This story from long ago, tells that the winged horse Pegasus was flying over Slovenia when he struck his hoof on a mountain and a spring of miraculous mineral water appeared. It may sound a little strange, but this legendary tale has turned into history, which based on coins and other archaeological finds indicates that the effectiveness of natural mineral water had been discovered during the time of the Celts and the Ancient Romans. Although people have long enjoyed the benefits of this invigorating water, it was only in 1572 that Swiss alchemist Leonhard Thurneysser began to study it scientifically, thus paving the way to a more precise description of its properties, and he called it “Rogaška mineral water. Although Rogaška mineral water was discovered by Pegasus, it was Apollo, the god of health, Beauty & Skincare, who was so taken by this invigorating water that he was prepared to give up drinking the water from the holy Greek mountain, Helikon. In honour of this, every bottle of Donat Mg natural mineral water bears Apollo’s image to this day.

How can I improve digestion?

To improve your overall digestion you should:

How do you drink Donat Mg?

Donat Mg is recommended by the professional medical public for solving different issues, especially for preventive use and prevention of subsequent complications. In the drinking program for stimulation of digestion, Donat was consumed continuously and for a long time. Those participants involved in the program drank Donat Mg slowly & at room temperature 3 times a day.